InfoCAP3000 is a PC program (Windows) capable of managing all the BetaCAP series gas dividers functions automatically and unattended.

Through the main menu you can access the functions:

The test is defined through a list of “steps” that correspond to the different commands that the program gives to the diluter via RS485 according to the AK protocol : some commands (eg: activate the dilution factor XX / 30) are explicitly included in the list, while others (eg: detects the value of the pressure or instrument measurements) are implicitly managed by the software. For each position in the list, the command is chosen from those available (drop-down menu) and is often characterized by one or more parameters (eg: time, dilution factor …). No programming knowledge is required.

To function properly and usefully, it is important that the measurement signals of the instruments receiving the diluted gas are connected to the diluter through the interface provided. In this way the software is informed about the expected values and two measured values of concentration, thus being able to evaluate the deviations and draw up a report with the results of the test.

Downloads the Data Sheet of InfoCAP3000ENGDownload

A menu is provided for the translation of the user interface in different languages: all the menus and the identification labels of the fields are shown in a table of five columns, each dedicated to a language. By activating the desired language, all the writings appear translated. In addition to the main languages (English, French, German, Spanish and Italian, a sixth language can be predefined by the User (including languages that use character sets different from Europeans)

Based on the data automatically saved during the test, a report can be automatically prepared immediately or at a later time. Some “forms” are available that define the structure of the document “Test report”: these can be customized in almost all the details by the User, based on his preferences and / or on the type of test they have to document. It is evident that a linearity test on 5 points repeated 3 times will require a greater number of boxes than a similar test but without repetitions. The most appropriate format, if already built, is chosen by the user when drafting the test report. 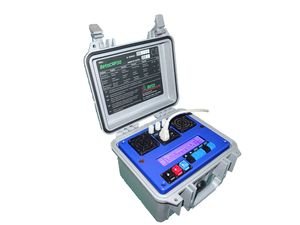 BetaCAP30 is a gas divider that uses 30 capillaries, to operate 31 dilution ratios (between 0 and 100% of the concentration to be diluted). The choice of 30 capillaries is… 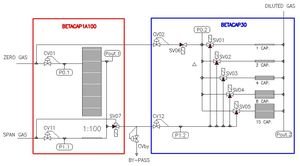 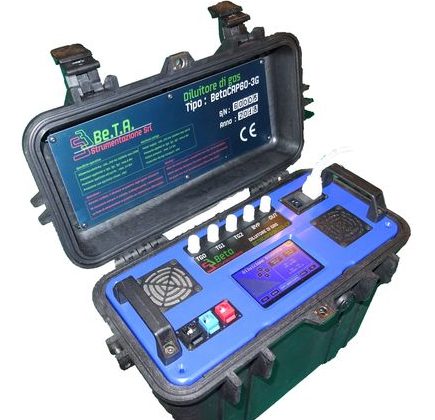 BetaCAP60-3G is a 60-step diluter, capable of diluting 2 gases in a diluting gas, in any relationship between them. BetaCAP60-3G was created to satisfy the need of combining linearity tests…

BetaCAP60X100 -The top class divider of Be.T.A. Strumentazione BetaCAP60X100 a compact diluter with 3 inputs (two gases to be diluted in a diluting gas), pre-dilution just for an input and…

A family company, focused on product
performances re-investing nearly all the earnings in developing and realizing product innovations and testing tools required to increase the metrologic product performances. The first clients had sightless confidence but the clients of today may get positive references from our past work.

Any cookies that may not be particularly necessary for the website to function and is used specifically to collect user personal data via analytics, ads, other embedded contents are termed as non-necessary cookies. It is mandatory to procure user consent prior to running these cookies on your website.